During his career as the head librarian at Idaho State College (later known as Idaho State University), Eli Oboler actually planned two new library buildings (a feat that only one other librarian had achieved at that time).  The first, completed in 1954, was also home for the Idaho Museum of Natural History, which still resides there. Oboler began planning for an addition to that building in 1964, as the library collection was increasing rapidly. Between 1964 and 1977, when the new library building was completed, he encountered many obstacles. These are described in his article, "The Building of a Story and the Story of Building,"  which appeared in the January, 1976 issue of the Idaho Librarian (Vol. 28 #1, pp. 6-9). 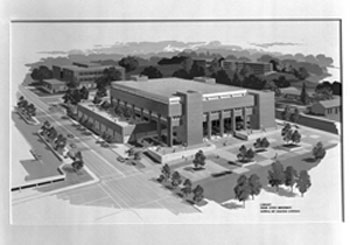 The new Library building was finally funded, and completed in 1977.

Dedication of the ISU Library in 1977

Oboler retired in 1980, but was awarded emeritus status. In 1983 ISU recommended to the State Board of Education that the ISU Library be renamed the Eli M. Oboler Library, because he'd served the university "with distinction in an exemplary manner." The ISU Board of Trustees adopted a resolution April 7 of that year, and the library's rededication in Oboler's honor took place April 20, 1983, during National Library Week. Judith Krug, head of the American Library Association's Office for Intellectual Freedom, spoke at the ceremony, calling Eli "one of the most noticed and noticeable spokesmen" in behalf of intellectual freedom. The text of Ms. Krug's speech may be found in the Newsletter on Intellectual Freedom (Vol. XXXII No. 5, Sept. 1983, pp. 170-171).

Eli M. Oboler passed away just two months later, but his name, and his library, live on. We hope that you enjoy using this library, and we encourage you to let us know if there is any way we may help you to find the answers you seek, on any topic. We are grateful to Mr. Oboler for his dedication to the ideals of intellectual freedom, customer service, and academic excellence.